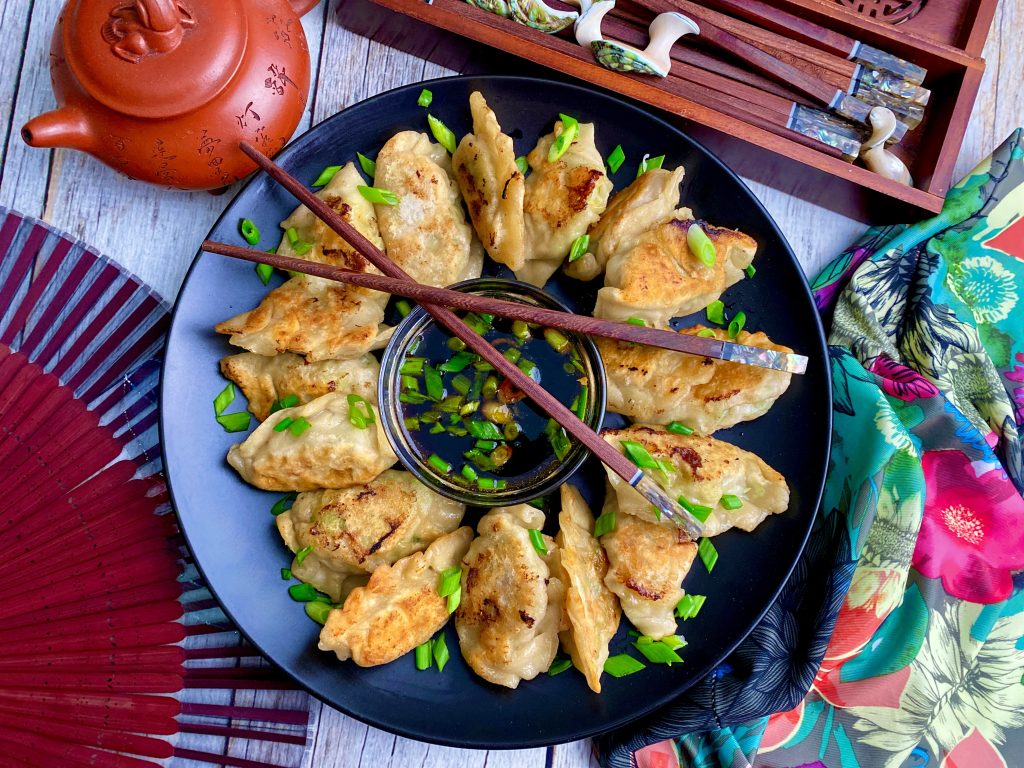 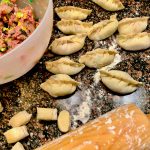 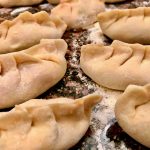 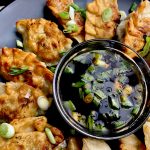 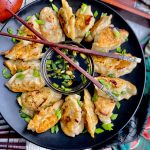 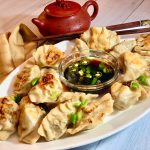 To make the dough, place the flour in a large bowl and slowly add the water stirring with chopsticks to combine.  Once all of the water is added and dough begins to come together, turn it onto the counter and bring it together into a ball using your hands.  Knead for 10 minutes.

Form dough into a ball and place it in a bowl dusted with flour.  Top the dough with a clean damp dish towel and cover the bowl tightly with saran wrap.  Let rest for 3-4 hours.

After the dough has rested, remove from the bowl and knead for 3 minutes (dough will be much softer now).  Divide dough into 3 equal parts and top again with the damp towel on the counter.  Let rest for 30 minutes.

While dough rests, prepare the filling.  Place the dried shitakes in a small bowl and cover with boiling water.  Let them rehydrate for 20 minutes while you prepare the rest of the filling.  Top them with a plate or weight to keep them submerged in the water.

Fill a medium saucepan half way with water and bring to a boil.  Place the cabbage in the boiling water and cook for 1 minute until just wilted.  Drain in a strainer and press out any excess moisture with a paper towel.

In a large bowl, combine the ground pork, chopped shrimp, cabbage, scallions, garlic, ginger root, salt, soy, mirin, rice vinegar, sesame oil, and water.  Drain the mushrooms and squeeze out any excess moisture.  Chop fine and add to the bowl.  Using your hands, massage all of the ingredients until everything is evenly incorporated.  Set aside.

To make the wontons, lightly flour your hands and take one piece of the dough and roll into a small log, about 1” thick.  Cut into 12 equal disks.  Flatten one disk with your hand to make a small circle.  Using a rolling pin, roll the disk to about 3” in diameter.  Place about 1 tablespoon of filling the center of the dough.  Flute the top of the dough by creating small ‘dumpling’ folds.  Make sure to fully seal the top of the dough by squeezing with your fingers.  Place on a cookie sheet dusted with flour.  Repeat with the remaining dough.

To cook the dumplings you can either boil/steam or pan fry.  To boil, bring a large pot of water to a boil.  Working in batches, drop the dumplings in the boiling water and gently stir to prevent them from sticking to the bottom.  Cook until they rise to the top of the water and then cook 1minute more.  Remove with a slotted spoon or spider and place on a plate.  Garnish with scallions and serve immediately with dipping sauce.

To pan fry, heat 2 tablespoons of oil (vegetable or peanut) in a large skillet over medium high heat.  Place the dumplings in the hot oil and cook until golden brown, about 1 minute per side.  Once they are seared, place about ¼ cup of water in the hot pan and cover immediately to steam and fully cook through, about 1 more minute.  Remove to a plate and serve immediately with dipping sauce.  Dumplings can also be frozen raw.  Do not defrost before cooking, just increase the cooking time by a few minutes to cook through.

To make the dipping sauce, whisk together the soy, rice vinegar, sesame oil, sugar, and scallions in a small bowl.