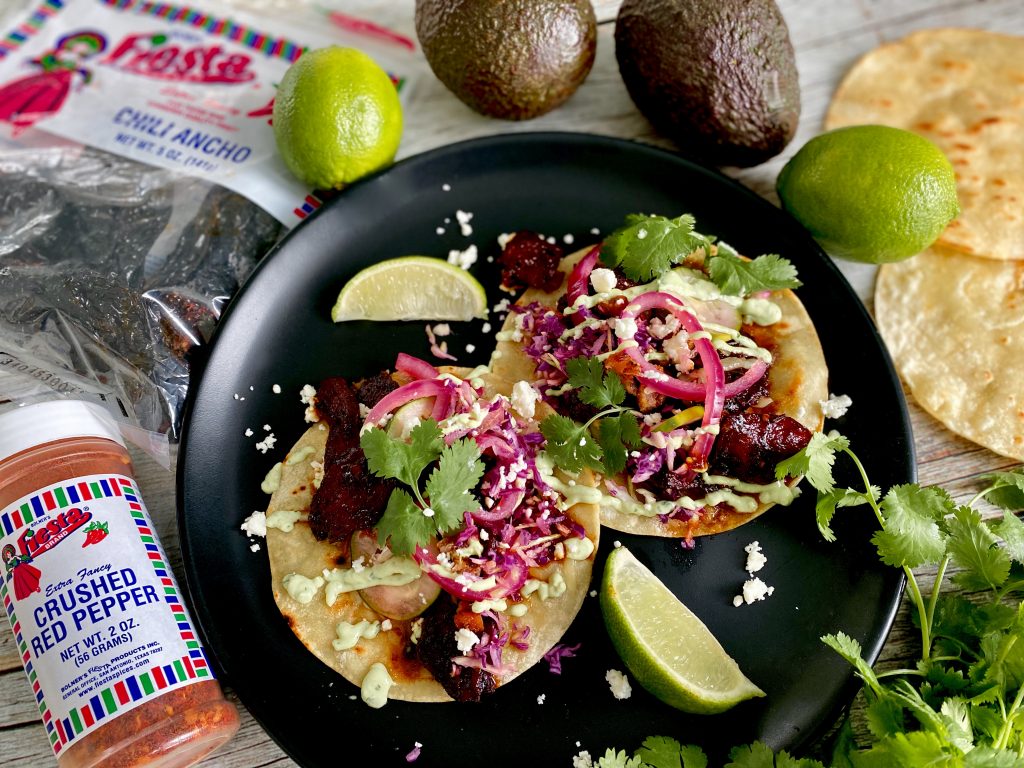 1 avocado, pitted and flesh scooped out of the shell

To make the pickled onions and cucumbers, combine the vinegar, water, sugar and salt in a saucepan and bring to a boil, stirring to dissolve sugar.  Pour the hot liquid into a large jar and add the onion and cucumber slices to the jar and shake so that everything is covered in the liquid.  If needed open the jar and press the veggies into the liquid with a fork.  Shake occasionally to ensure the onions are all coated in the liquid.

To make the crema, combine the sour cream, heavy cream, avocado, cilantro, and salt in a blender or food processor and process until smooth.  Keep chilled until ready to assemble tacos.  Optional – put the crema in a plastic squeeze bottle for pretty presentation.

To make the slaw, combine the purple and napa cabbage in a small bowl and toss with the lime juice.  Set aside.

To make your sweet and spicy duck, start by preparing the dried chili ancho sauce.  Remove the stem and seeds from each chili and place them in a large saucepan.  Turn the heat to medium high and toast the chilies for 1 minute on each side.  Cover them with 2 cups of water and bring to a boil.  Cook for 8-10 minutes until the chilies are soft and reconstituted.

Place reconstituted the chilies in a food processor or blender along with ¼ cup of their cooking liquid, 1 teaspoon of the salt, the apricot preserves, marmalade, crushed red pepper, and lime juice.  Process until smooth.  Set aside.

Score the skin on each of the duck breasts in a crisscross pattern, cutting all the way through the skin, but not into the meat.  Season on both sides with the remaining teaspoon of salt and the black pepper.  Place them, skin-side down in a cold cast iron or oven proof skillet.  Turn the heat on to medium and cook for 12-15 minutes until most of the fat has rendered and the skin is brown and very crispy.   Cook for 2-3 minutes on the other side and then place the skillet in the oven and cook for 20-30 minutes until the internal temperature of the meat registers 135-140 degrees.

Cut the duck meat into very thin slices and place in a large saucepan.  If the duck breasts are very thick, you may want to cut the slices in half.  Pour the chili ancho sauce over the duck and cook over medium heat until the duck is well coated and hot, about 3-4 minutes.

Heat your grill or grill pan over medium high heat and drizzle with olive oil.  Toast the tortillas on the grill until they are toasty and have grill marks on the first side.  Turn and place a few tablespoons of the pepper jack cheese don’t the center of the tortilla and toast for 1 minute more until cheese begins to melt and tortilla is toasted on the other side.  Remove from heat.

Place a few pieces of the saucy duck on top of the pepper jack cheese in the center of each tortilla.  Top with a few of the pickled onions and cukes.  Sprinkle with some of the chopped duck skin and some slaw.  Drizzle with the crema and sprinkle with the Cotija cheese and cilantro leaves.  Serve with lime on the side.  DEVOUR!