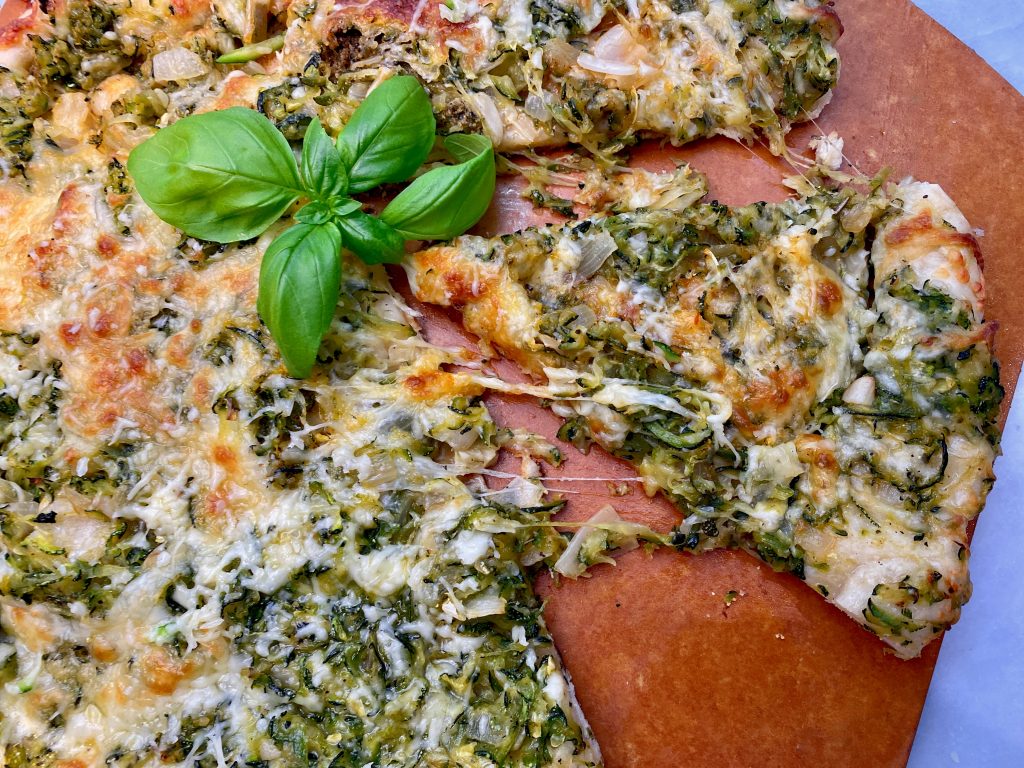 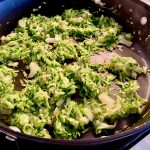 Pizza dough for one crust (recipe follows or use store bought)

Place pizza stone in the oven and preheat to 425 degrees for 30 minutes.

Grate the zucchini in a food processor or on a box grater (largest holes).  Sprinkle with the salt and place in a colander to drain for 20 minutes.  Press with paper towels to remove any excess moisture. Measure out 1 packed cup and set aside.

Melt butter in a large frying pan over medium high heat.  Add onions and garlic and cook until soft and fragrant, about 3 minutes.  Add the zucchini and black pepper.  Cook until any liquid is absorbed and vegetables start to lightly brown.  Set aside.

Form the pizza crust into a 14” round on a pizza peel topped with cornmeal, leaving the edges slightly thicker for the crust.

Brush the edges of the crust with 2 tablespoon of the olive oil.

Spread the zucchini mixture evenly over the crust almost to the edges.  Topped with grated parmesan followed by mozzarella.  Drizzle with remaining 2 tablespoon olive oil.

Using the peel place the pizza on the stone in the oven and bake for 18-20 minutes until the cheese and crust are lightly browned.

Place olive oil, honey, and water into the bowl of a stand mixer.  Stir to dissolve honey into the water (so it doesn’t stick to the bottom of the bowl).  Sprinkle the yeast on top of the liquid mixture, stir, and let sit for 5-10 minutes until yeast becomes foamy.

Add salt and 2 ½ cups of the flour.  Mix using the dough hook attachment.  Gradually add as much of the remaining flour as needed until a ball forms.  Empty dough onto a floured countertop and knead for 10-15 minutes until dough is smooth and elastic adding flour as needed if sticky.

Place dough in a greased bowl and cover with a clean kitchen towel.  Let rise in a warm spot for 1 hour until doubled in bulk.

Knead dough briefly and divide into 2 equal parts and form balls.  Let rest for 30 minutes under a clean kitchen towel.

If you are not using both balls, refrigerate each ball in a plastic bag sprayed with cooking spray for up to 5 days.