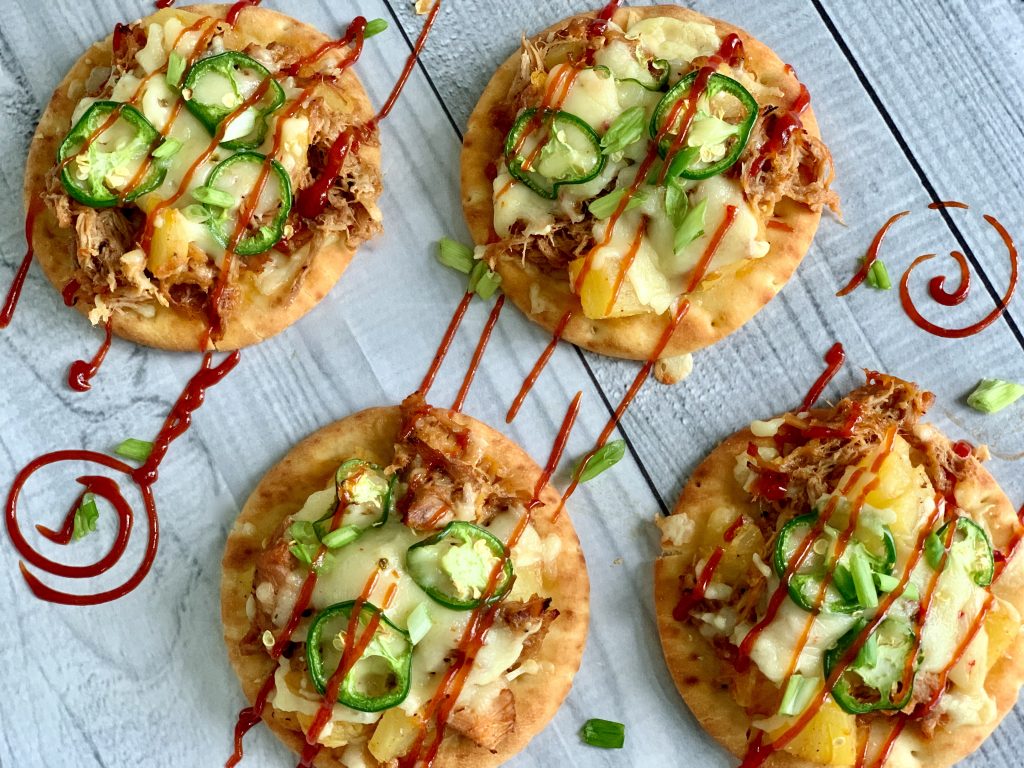 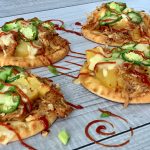 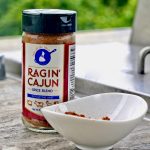 Combine the pulled pork and pineapple in a large bowl and toss to combine.  If the pork is cold, warm in the microwave first, so it is easier to toss and cooks evenly in the oven.

Place the naan breads on baking sheets lined with foil and sprayed with non-stick spray.  Divide the pork mixture between all of the naan breads, mounding in the middle and  leaving a bit of edge exposed.

Top with the shredded cheese followed by several slices of jalapeño.

Bake for 10-12 minutes until the cheese is melted and bubbly.  Garnish with scallions and drizzle with more BBQ sauce.

Preheat oven to 250 degrees.  Heat the olive oil in a large Dutch oven, big even to hold the pork with enough extra room around it for air to circulate.

Remove your pork shoulder from the package and rinse with cold water.  Pat dry with paper towels.  Rub all over with the Cajun Spice to coat well.

When the oil is very hot.  Sear the pork shoulder on all sides, including the ends, until well-crusted, about 3-4 minutes per side.  Remove to a plate.  Add the onions to the pan drippings and cook, stirring frequently for 2-3 minutes until they are soft and fragrant.  Add one of the beers to the pan and stir, scraping up the brown bits on the bottom of the pan.

Add the pork back into the pan, on top of the onions and pour the remaining beer into the pan.  The liquid should come about halfway up the meat.  Add a little water if more liquid is needed.

Cover and place in the oven.  Cook for 7-8 hours, turning the shoulder over once after 4 hours.  The pork is done when it is falling off the bone.

While your pork cooks, make your BBQ sauce.  Combine all of the sauce ingredients in a large saucepan and whisk until smooth, bringing to a boil.  Reduce the heat to low and let the sauce simmer on low for 1-2 hours, stirring occasionally.  The longer this sauce sits the better it gets.  I usually make both the pork and sauce the day before I plan to serve it, but it’s still good same day!

When your pork is done, remove the meat from the pan, to a large bowl and shred the meat with two forks. Set aside.

Skim as much of the fat as you can off the juices in the pan.  I like to pour the juices into a bowl or container and place them in the freezer (once they are room temperature) for an hour or two.  The fat will congeal and is easier to scrape off the top this way.

Combine the liquid (should be about 2-3 cups with fat removed) and 1 ½ cups of the BBQ sauce back in the Dutch oven and stir to combine.  Add the shredded pork and stir to coat.  Taste that yummy goodness!!  Depending on the size of the pork shoulder and amount of liquid you may want to add another ½ – 1 cup of BBQ sauce to taste.

Place the remaining BBQ sauce in a squeeze bottle or serving dish to spoon extra for sandwiches, tacos, pizza, etc…