SWEET POTATO AND BEET HASH WITH SUNNY SIDE EGGS 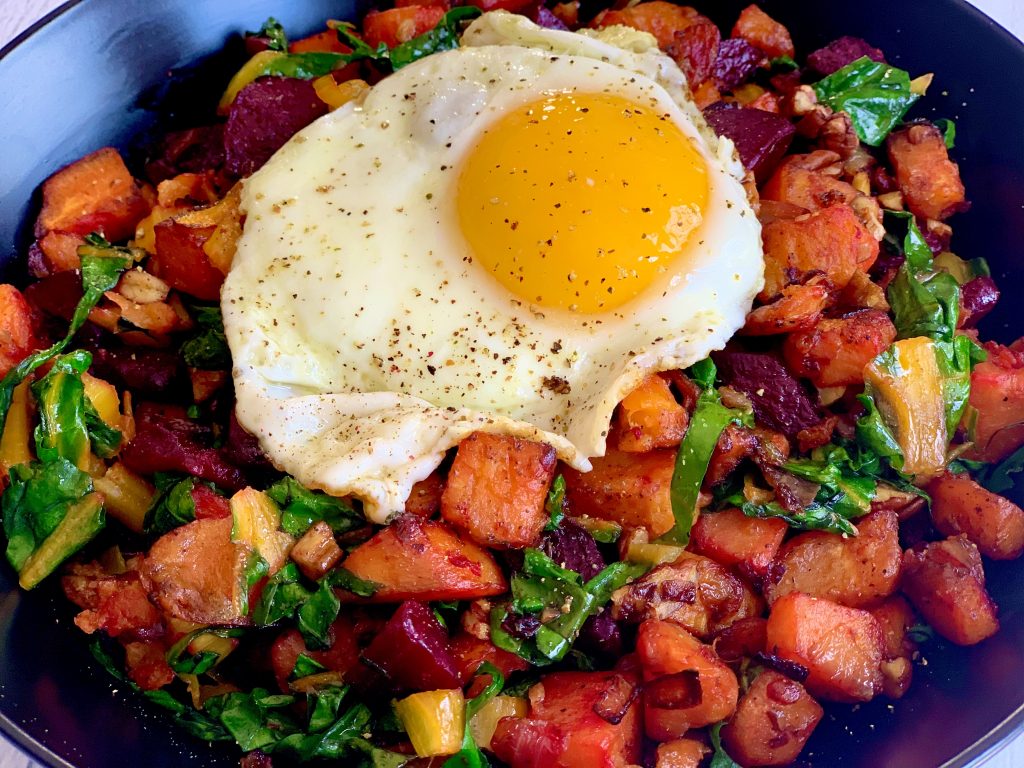 1 large or 2 medium sweet potatoes, chopped into ½” dice, about 4 cups

3 cups rainbow Swiss chard, rough chopped (or you can use the beet greens if they are in good shape)

4 eggs, cooked sunny side up, over-easy, or poached

Cut the greens off the beets, leaving about 2” of stem attached to the beet.  Reserve the greens for another use.  Cover the beets with cold water and bring to a boil.  Cook for 40-50 minutes, depending on the size of the beets, until they are tender and a knife slides in and out easily.

Cover the beets with cold water and, using your hands, rub the skin off under cold running water.  The skin will easily slide off the beets, but work quickly so you don’t stain your hands.  Chop the beats into ½” dice and set aside. Should be about 2 cups diced.

Add the chopped beets and pecans to the pan and toss again.  Flatten into a single layer, cover and cook 1 minute.  Toss and flatten again, cover for 2 final minutes.  The sweet potatoes should be tender on the inside and crispy on the outside with beautiful caramelization.

Toss in the Swiss chard and cook for one more minute until the chard is wilted. Test for seasoning.

Serve a heaping bowl of hash topped with one or two fried eggs.  YUM!

CHICKEN, SWEET POTATO, AND 3 PEPPER CHOWDER WITH A HINT OF HEAT