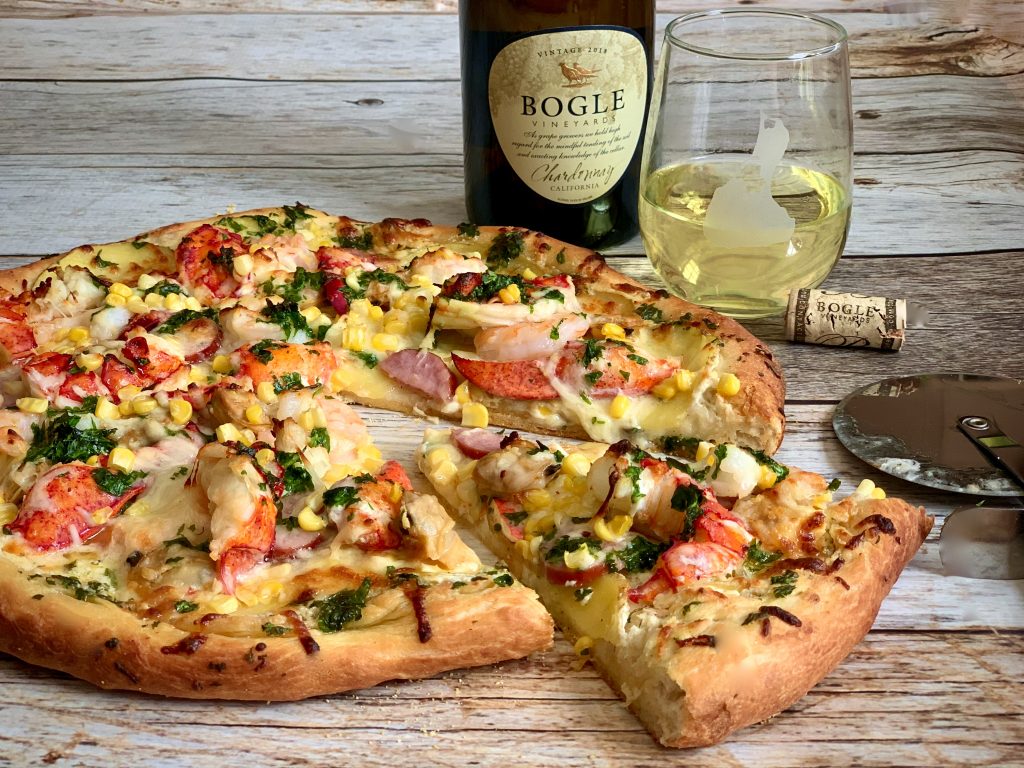 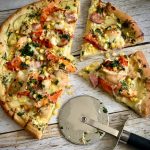 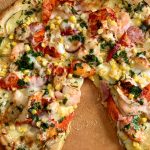 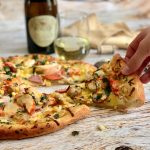 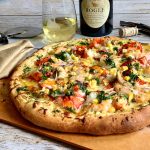 1 tablespoon olive oil (plus 2 teaspoons to oil the bowl)

To make your pizza dough, place olive oil, honey, and water into the bowl of a stand mixer.  Stir to dissolve honey into the water (so it doesn’t stick to the bottom of the bowl).  Sprinkle the yeast on top of the liquid mixture, stir, and let sit for 5-10 minutes until yeast becomes foamy.  Add salt and 2 ½ cups of the flour.  Mix using the dough hook attachment.  Gradually add as much of the remaining flour as needed until a ball forms.  Empty dough onto a floured countertop and knead for 10-15 minutes until dough is smooth and elastic adding flour as needed if sticky.

Place the littleneck clams in one layer in a deep skillet and top with the wine.  Cover and let steam until the clams are just opened.  Remove the meats and set aside.

Take one ball of the dough and form into a 14” round.  Spread cornmeal on a pizza peel and arrange the dough on top.

Spread the garlic and herb cheese all over the base of the crust, leaving ½” exposed around the edge of the dough.  Push cheese into the dough around the edges with your fingers to ensure the crust keeps its round shape.  Place the thinly sliced potatoes on top of the cheese, slightly overlapping in one layer until covered.

Evenly space the kielbasa, raw shrimp, and clams on top of the potatoes.  Top with ½ cup of the mozzarella.  Spread the lobster meat evenly over the top of the cheese and in between the shrimp and kielbasa.

Evenly sprinkle the corn on top and finish with the remaining half cup of shredded mozzarella.

Melt the butter with the garlic in a small sauce pan and cook, stirring, until the garlic is fragrant.

Remove from heat and stir in the parsley.  Brush the parsley butter all over the over the exposed crust and drizzle the remaining butter over the top of the pizza.

Slide the pizza off the peel onto the hot pizza stone in the oven and bake for 15 minutes until golden and bubbly.

Pour yourself a glass of Bogle Chardonnay and DEVOUR.