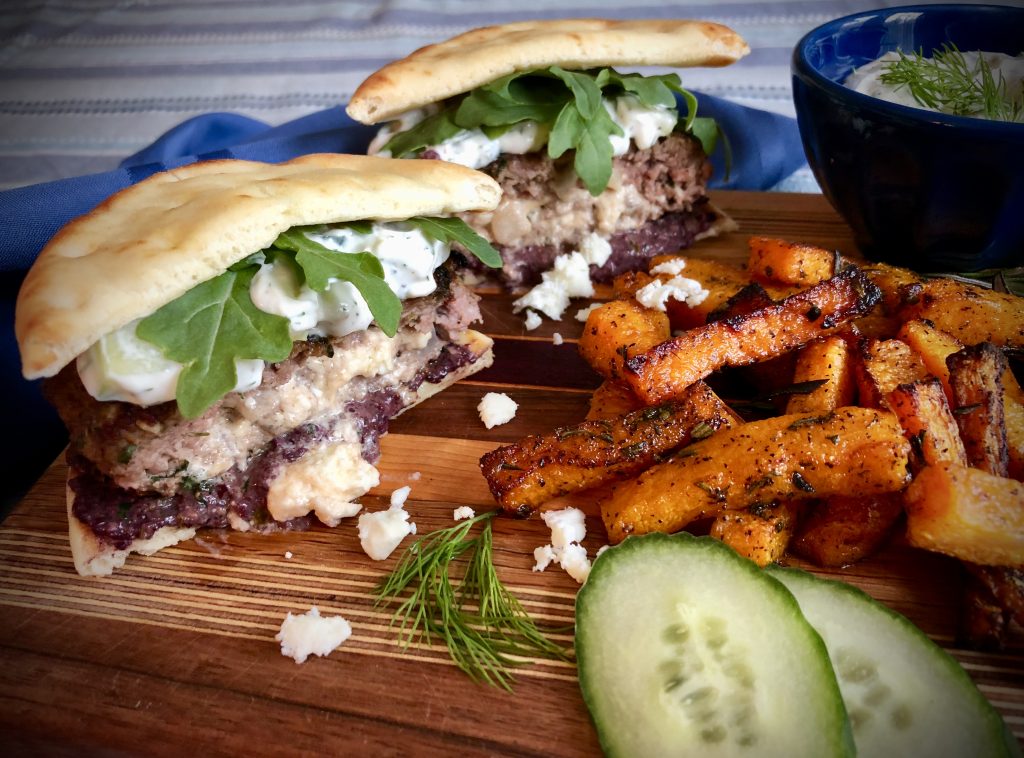 Combine all of the tzatziki sauce ingredients in a small bowl and mix well to combine.  Set aside to let flavors marry while you make the rest of the burger ingredients.

Combine all of the tapenade ingredients in the bowl of a food processor and pulse until well combined, scraping down sides so everything is well incorporated.  Remove to a small bowl and set aside.

Combine the lamb, mint, salt, pepper, cinnamon, oregano cumin, thyme, and egg in a large bowl.  Massage all of the ingredients together with your hands until well incorporated.  Divide the meat mixture into 6 equal parts, then divide each of those into 2 patties about 5” in diameter.

Crumble the feta in a small bowl and add the Chipotle Mayo.  Mix well to combine.

Take one of the 12 patties and place a heaping tablespoon of the feta mix in the center.  Place another patty on top and seal the edges tightly, pressing with your fingers.  Repeat to make 6 stuffed patties.

Preheat a large skillet, preferably cast iron, over medium high heat.  Place the patties in the skillet and sear on the first side for 4 minutes until browned and caramelized.  Flip and do the same on the other side.  Place the pan into the oven and let finish cooking for 5-10 minutes.  Internal temp should be 160 degrees.

Place the naan flatbreads on a large baking sheet and brush lightly with olive oil.  Place in the oven for 7-10 minutes until lightly browned and toasted.

To make the fries, preheat the oven to 425 degrees.  Peel the butternut squash and remove seeds.  Cut the flesh into thick matchsticks, about 4” long and place on a foil lined baking sheet.  Drizzle the squash with oil and evenly sprinkle with rosemary and black pepper.  Toss with your hands to evenly coat.  Bake for 20-30 minutes until browned and crispy, tossing once after about 15 minutes.  Remove from oven and season with salt.

These “Naan-Traditional” burgers are literally bursting with flavor (and feta cheese!).  The lamb burgers are seasoned with fresh mint, dried oregano, thyme, cumin, and cinnamon creating a rich and complex flavor profile.  They are stuffed with feta cheese and Hellmann’s Organic Spicy Chipotle Mayo which oozes out of the burger when you bite in (cue the napkins).  They are enveloped in an earthy, briny olive tapenade on the bottom and a bright, crunchy tzatziki sauce on the top – both enhanced with Hellmann’s mayo.  The whole thing is encased between two soft naan flatbreads and a hint of spicy arugula.  The fries are roasted butternut squash seasoned with fresh rosemary.