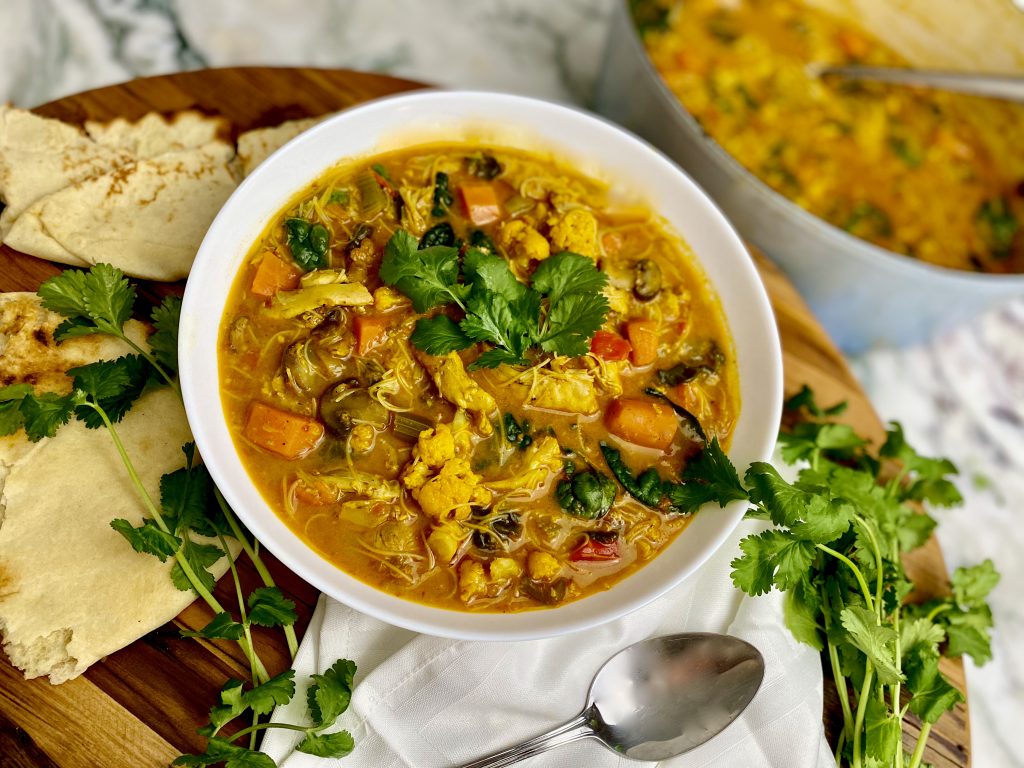 Put the tomatoes, ginger, garlic, jalapeño, sun dried tomatoes (with the oil), and cumin seed in the bowl of a food processor and pulse until everything is combined into a loose paste.

Transfer this mixture in a large Dutch oven (7 quart) or heavy bottomed soup pot and bring to a boil over medium high heat, stirring frequently.  Add the chicken thighs, cardamom, turmeric, Garam Masala, salt, black pepper, and red pepper flakes to the pot and continue cooking, stirring frequently, as you chop the rest of the veggies and add them to the pot.

As you chop each vegetable, add them to the pot, stirring after each addition – onions, mushrooms, celery, carrots, red bell pepper, yellow pepper, and cauliflower.

Add the chicken stock to the pot and bring to a boil.  Reduce heat to a simmer and cover the pot, leaving it slightly vented to let some steam escape.  Cook for 20-30 minutes.  Remove the chicken thighs from the pot and let them cool.  Add the coconut milk and continue cooking on a simmer for another 30 minutes until carrots are tender. Shred the cooled chicken into bite size pieces and add them back into the pot.

Add the rice noodles to the pot and continue cooking on a simmer for 10-15 minutes until noodles are soft. Just before serving, stir in the spinach and cilantro into the pot and cook, stirring until wilted, about 5 minutes.

Serve the soup hot in bowls, garnished with more cilantro and with naan bread (or any good crusty bread) on the side for dipping.