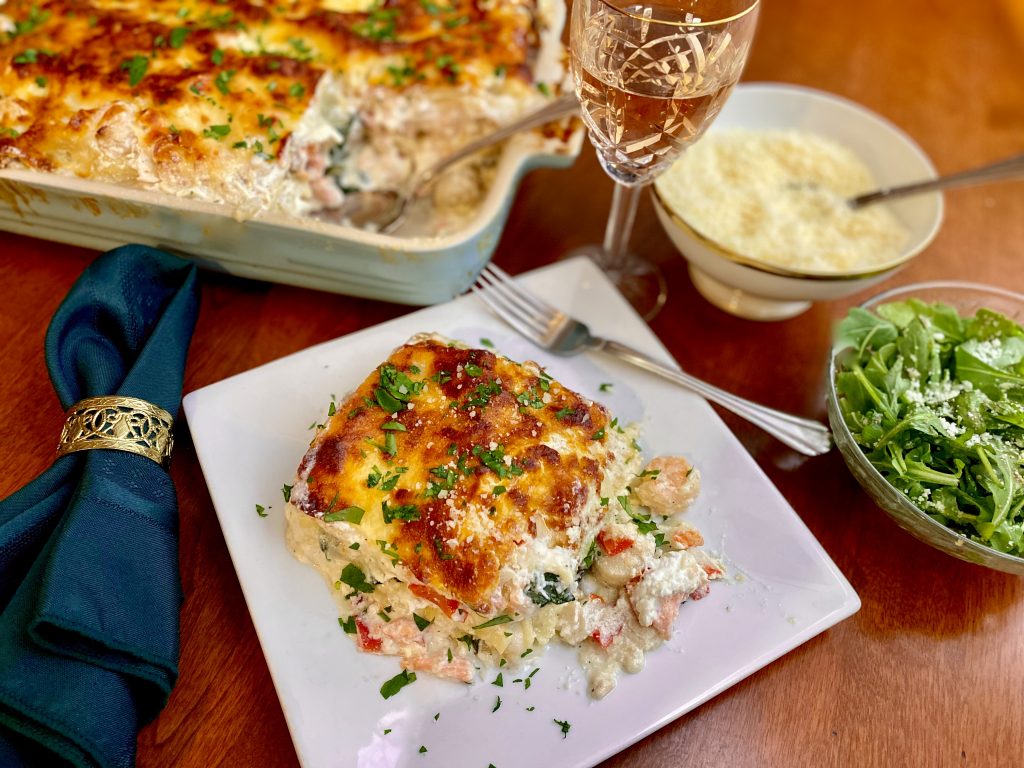 3 cups fat free half and half or light cream

1 pound scallops, cut in half if very large

The Noodles and Cheese:

To make the sauce, melt the butter in a large saucepan, over medium high heat.  Stir in the flour and whisk until it’s bubbly.  Add the half and half and cook, whisking frequently, until it begins to thicken, about 5-6 minutes.  Add the cream cheese, salt, and pepper and continue whisking until the sauce is thick and smooth.  Stir in the chopped crab meat and add the parmesan cheese, ¼ cup at a time, until it is all well incorporated and the sauce is thick and rich.  Set aside.

To prepare the veg, melt the butter in a large deep skillet, over medium high heat.  Add the onion and garlic and cook until soft and fragrant, about 3 minutes.  Add the red pepper and spinach to the pan and cook, stirring until the spinach is JUST wilted.  Remove from heat and set aside.

Spray a 9” x 13” pan with non-stick spray and ladle about ¾ cup of the cream sauce into the pan and spread evenly over the bottom.  Place one layer of the noodles on top of the sauce, breaking them as needed to completely cover the bottom of the pan.

Pat the shrimp and scallops dry between paper towels and add to the cream sauce.  Cut the salmon into 2” pieces and also add that to the sauce.  Stir to coat and combine.

Begin layering, but covering that first layer of noodles with about 1 ½ cups of the seafood sauce spreading everything into and even layer.  Top evenly with half of the vegetable mix and place half of the ricotta over the top in evenly spread out dollops, followed by 2 cups of the shredded mozzarella.

Place another layer of noodles on top of the mozzarella and press down gently with your hands.

Then, add the last layer of noodles, pressing down gently.  Spread any remaining sauce over the noodles (this will be a thinner layer but enough to cover the noodles), followed by remaining cup of mozzarella and the ½ cup of parmesan cheese.

Cut into squares and garnish with chopped parsley and more parmesan.  Put on your spandex and dig in!