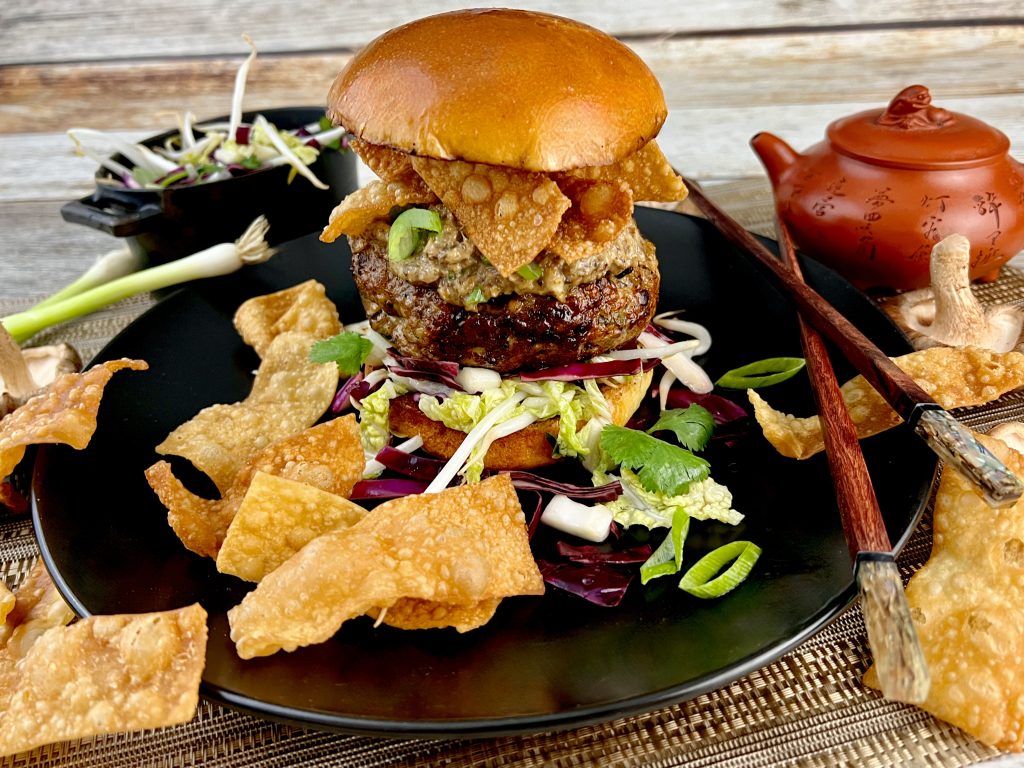 The Burgers and Buns:

To make your burgers, heat 2 tablespoons of the peanut oil the oil in a large skillet over medium high heat.  Cook the mushrooms, garlic, and ginger for 5-6 minutes, stirring frequently, until the mushrooms have released all of their moisture and begin to lightly brown and caramelize.  Set aside and let cool to room temperature (this is a good time to make your mayo and fry your wontons).

Place the cooled mushrooms in the bowl of a food processor with the shrimp, ground pork, soy, sesame oil, mirin, egg, and salt.  Pulse the mixture several times until well combined.  Scrape down the sides of the bowl and add the scallions.  Pulse 2 or 3 more times until the scallions are incorporated but still visible.  Wet your hands (to keep the mixture from sticking) and form it into 4 equal patties.

Heat the remaining 2 tablespoons of peanut oil in the skillet over medium heat.  Place the patties in the oil and cover the skillet.  Cook for 4-5 minutes per side until the internal temperature is 155-160 degrees.  Using tongs lightly sear the sides of each patty to brown.  Remove to a plate and tent with foil to keep warm.  Lightly toast the buns in the pan drippings.

To make the mayo, heat the oil in a large skillet, and cook the mushrooms and garlic until lightly browned.  Add the soy sauce and mirin to the pan and cook, stirring, until they are absorbed.  Let the mushrooms cool to room temp and add them to the bowl of a food processor with the wasabi, mayo and sesame oil. Process until smooth.  Stir in the scallions.

To make the wonton chips, heat the oil in a large saucepan to 350 degrees.  Stack the wonton wrappers and cut them into 3 equal strips.  Drop the strips into the hot oil and cook, tossing with a spider or tongs, for 1-2 minutes until lightly browned.  Remove to a wire rack placed over a baking sheet to cool.  Season lightly with salt.

To make the slaw, combine the cabbages, sprouts, cilantro, and scallions in a small bowl.  Whisk the vinegar, oil, and honey together until emulsified.  Toss the slaw with the dressing.

To assemble the burgers, place a mound of slaw on the bottom bun, top with a burger, then a generous amount of mayo, several wonton chips, and the top bun.