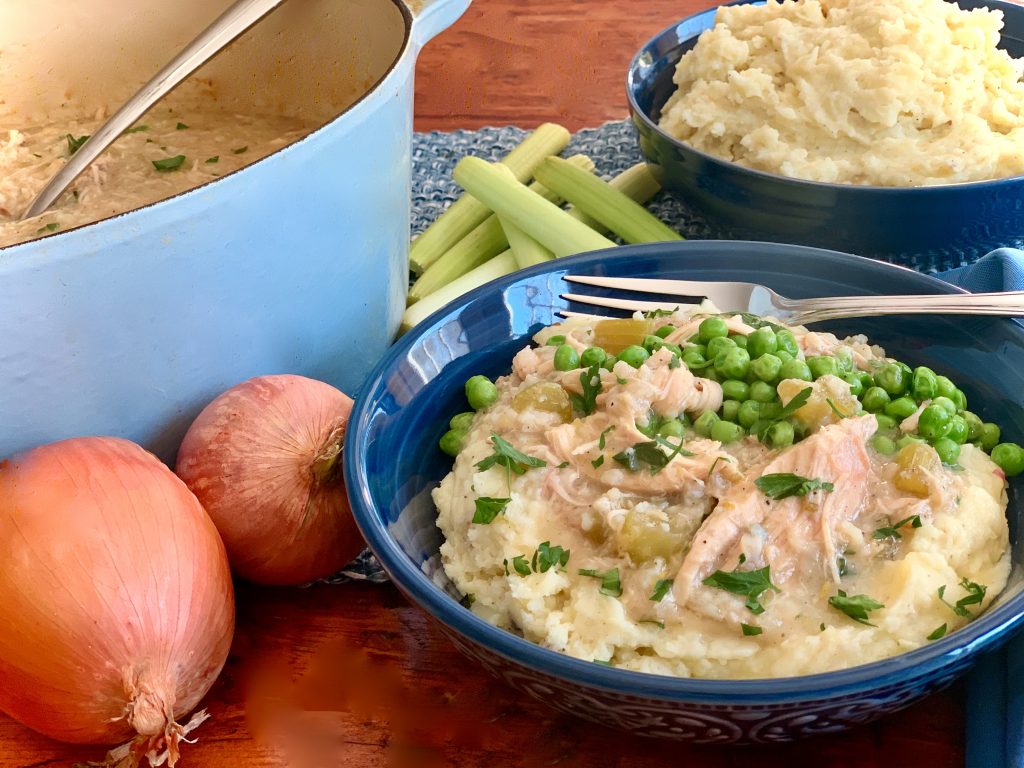 1 bunch of celery, chopped into ½” pieces including leaves

Place whole chicken, celery, and onions in a 6.5-8 quart Dutch oven or soup pot.  You want the chicken to fit in the pot without a ton of extra room around it.  Cover chicken and vegetables with the chicken stock.  Add enough water so the chicken is mostly covered in liquid.  Add the bouillon cubes, salt, and pepper to the pot.  Bring to a boil over high heat.  Cover the pot, leaving a small opening for some steam to release and reduce heat to low and let simmer for 2 ½ – 3 hours.  Periodically stir the contents and skim any excess fat off the top of broth.  If the liquid reduces significantly, add a little more water to the pan so the chicken remains mostly covered in liquid.

Gingerly, remove the chicken from the stock and place in a large bowl to cool (the chicken should be falling apart).   Add the rice to the stock and let cook while the chicken gets cool enough so that you can touch it.  Remove the skin from the chicken and discard.  Take the meat off the bones in large chunks (they will break apart so they should be bigger than bite-size) and add back into the pot.  Let cook until rice is cooked well, stirring occasionally.

Put the ½ cup of flour in a large jar with 1 cup of water.  Shake until well combined to create a ‘slurry’.  Add the slurry to the pot and stir.  Let cook for 10 minutes, stirring frequently, until stock thickens and a silky gravy is formed.  Adjust seasoning to taste and serve over mashed potatoes (recipe follows) with peas on the side.

Peel potatoes and cut into 3-4” pieces.  If potato sizes vary, make sure they are chopped into fairly even size chunks.  Place in a large metal pot with chopped onions and cover with cold water.  Bring to a boil over medium high heat and cook until potatoes are tender when pierced with a fork.  Pour into a strainer to drain.

Put drained potatoes and onions (mostly disintegrated already) back to the pot and add cold butter, 1 cup of the milk, salt and pepper.  Whip with a hand mixer on high speed until potatoes are creamy, gradually adding the additional milk as needed to create a velvety texture.  Test taste (the best part) to make sure the seasoning is correct and add additional salt and pepper if needed.

This is a favorite recipe from my childhood that my grandmother, fondly called Becky, used to make.  It makes your house smell like home and is addictively delicious!!