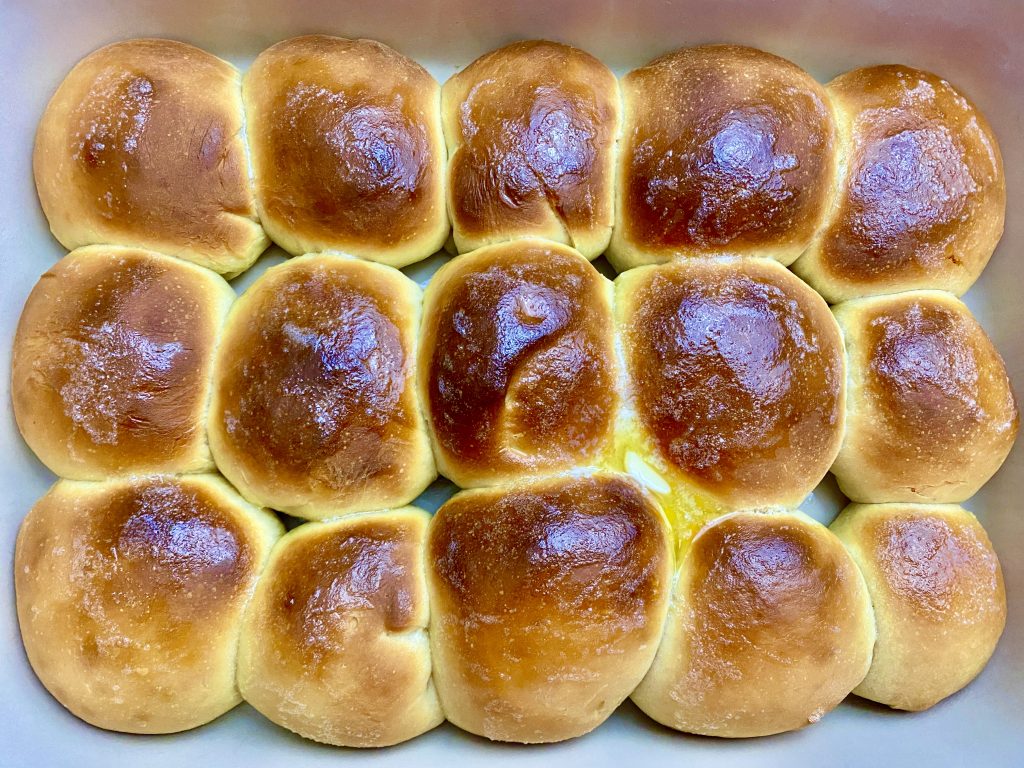 Heat the milk in a saucepan until it begins to simmer.  Whisk in the sugar until it dissolves.  Pour this mixture into the bowl of a stand mixer.  When the milk mixture is 120-125 degrees, sprinkle the yeast over the top of the milk.  Using the dough hook attachment, give one turn to mix the yeast into the milk.  Let sit for 5 minutes until the yeast is foamy.

Add ¼ cup of the melted butter to the bowl along with 2 cups of the flour and the salt.  Begin mixing on low speed.  When the flour is incorporated, scrape down the sides and add another cup of the flour.  Keep mixing and add another ½ cup of flour until incorporated.  Add as much of the remaining ½ cup of flour as necessary until a dough forms that is still tacky, but does not actually stick to your fingers when you touch it.

Turn the dough onto a lightly floured countertop and knead for 6-8 minutes until smooth and elastic, adding a dusting of flour as needed to keep the dough from sticking to the countertop.  You will know the dough is done when it no longer sticks to the counter when kneading.

Place the dough in a lightly-oiled bowl and turn once to coat with the oil.  Cover the bowl with plastic wrap and place in a warm place.  Let rise for 2 hours until doubled in bulk.

Lightly flour your countertop.  Place the risen dough on the counter and form into a log.  Cut into 15 equal pieces and for each piece into a smooth ball by pinching the dough together at the back and then rolling in your hands until smooth

Coat a 9” x 13” baking dish with non-stick spray.  Place the dough balls in the pan, equally spaced.  Cover the pan with plastic wrap and let the rolls rise for 40 minutes in a warm place.

Bake the risen rolls for 20-25 minutes until they are golden brown.  Remove from the oven and brush them with the remaining 2 tablespoons of melted butter.