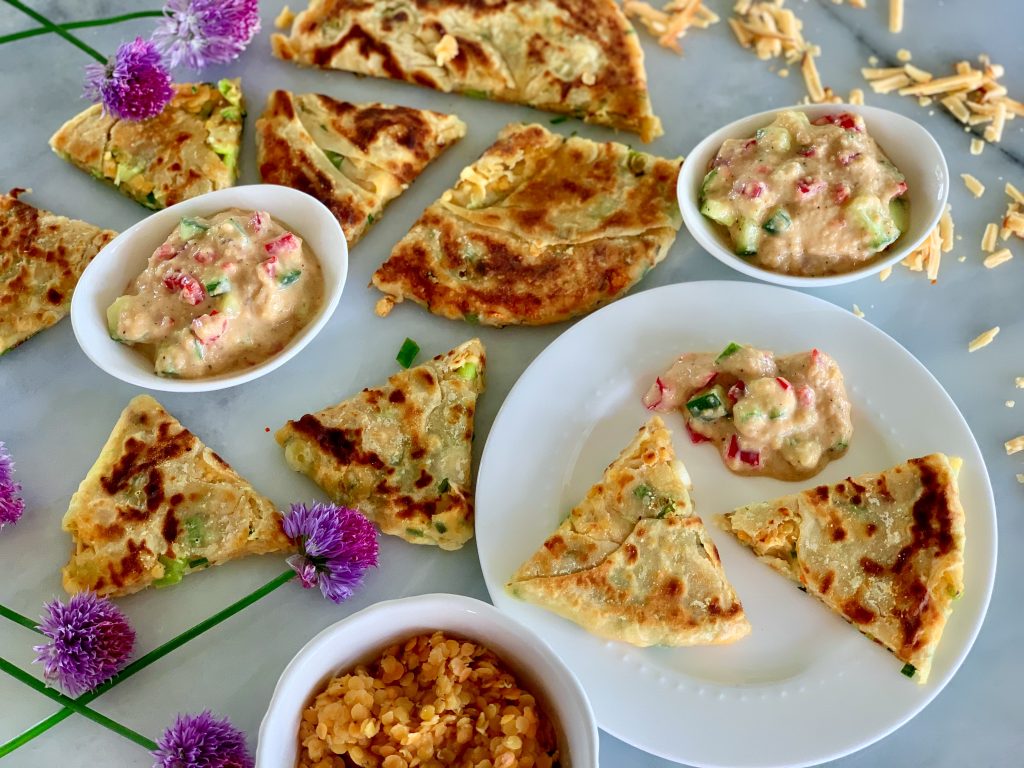 To make the dough, combine the flour and boiling water in a medium boil and stir to combine.  When the dough comes together and is cool enough to handle, begin kneading with your hands.  The dough will be a little sticky but keep kneading for at least 8-10 minutes until a smooth soft ball forms.  Wrap in plastic wrap and let rest on the counter for 15-20 minutes while you prepare the filling ingredients and dipping sauce.

Prepare the filling ingredients and set aside.

To make the sauce, combine the lentils, mayonnaise, garlic, salt, and pepper in the bowl of a food processor and pulse until smooth.  Transfer to a small bowl and stir in the chopped cucumbers and peppers.

When the dough has rested, cut it into 4 equal pieces.  Lightly dust your countertop and rolling pin with flour and flatten one of the pieces into a disc with your hand (keep the other 3 pieces covered with plastic wrap until ready to use).  Roll the dough into a very thin round about 10-12” in diameter, flipping over and dusting with flour periodically as needed.

Brush the dough all over with 2 teaspoon of the olive oil.  Cover evenly with ½ cup of the lentils, followed by ½ cup of the scallions, and ½ cup of the cheese.

Starting at one side of the dough, very tightly roll it into a long rope, pulling and tucking so that everything is very tightly incorporated.  Then, take one end of the ‘rope’ and curl it into itself forming a round flat spiral that looks like a coil.  You might need to seal the end of the dough to itself with a little bit of water.  Flatten that coil with your hand to make a disc, dust with flour on both sides and then roll it out with the rolling pin into a 6-8” disc.  Repeat with the other 3 pieces of dough.

Heat 1 tbsp of the vegetable oil in a large skillet, over medium high heat.  Add a pancake to the hot oil and cook until golden brown and crispy on both sides, flipping periodically for a total cook time of 3-4 minutes.  Repeat with the other 3 pancakes. Cut into wedges and serve with the sauce on the side.  Now…. Devour.