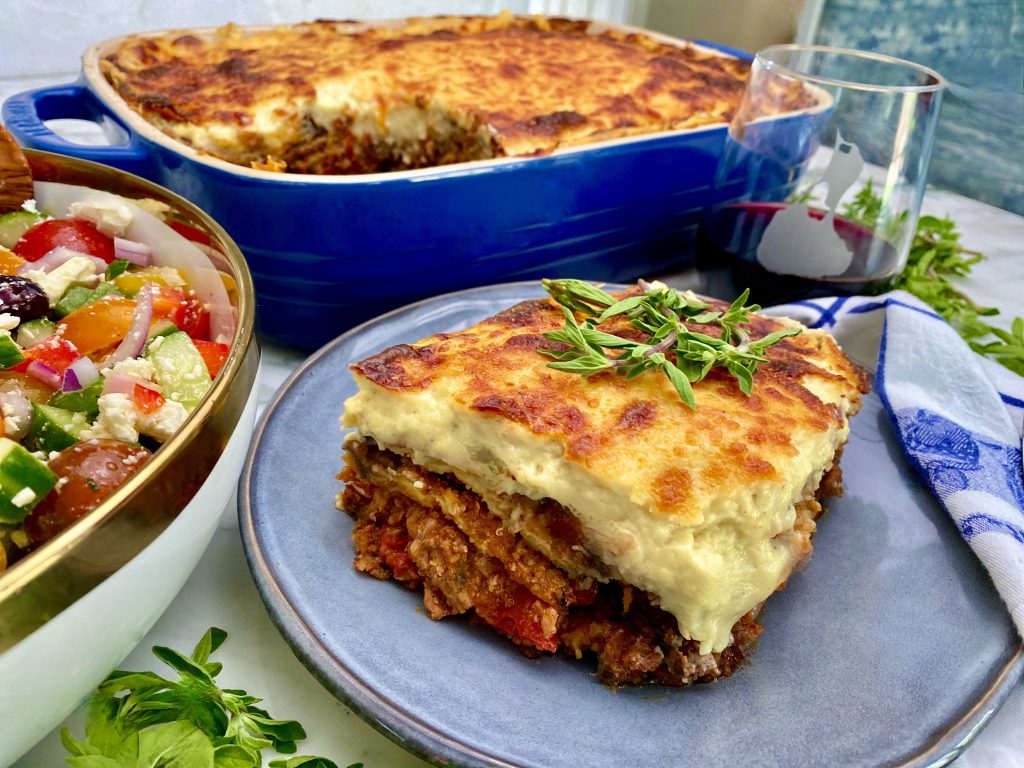 Coat the bottom of a large skillet with ¼ – ½” of vegetable oil.  Heat the oil over medium high heat until a drop of water ‘pops’ when dropped in the hot oil.  Dip the eggplant slices in the beaten eggs, let excess drip off, and press into the breadcrumbs to coat on both sides.  Place the breaded eggplant in the oil and cook for 2 minutes per side until golden brown and the eggplant is very tender when pierced with a fork.  Remove from the oil and place on baking sheets lined with paper towels to absorb any excess oil.  Season immediately with salt.  Continue to cook in batches and place layers of paper towels between the layers of eggplant on the baking sheet.  Note – I use 2 frying pans to make the process move a little faster.

To make the meat sauce, place the lamb in a large deep skillet and cook, breaking the meat up with a spatula or wooden spoon, over medium high heat.  When it is almost cooked through, add the onions, garlic, salt, and pepper to the skillet.  Continue to cook, stirring frequently, until the onions are soft and translucent, about 3-4 minutes.  Add the wine to the pan and continue to cook, scrapping up any bits on the bottom of the pan.  Bring to a boil and cook until most of the moisture is evaporated.  Skim any excess fat off the top of the meat in the pan.

Add the canned tomatoes, cinnamon, all-spice, bay leaves, oregano, and tomato paste to the pan.  Continue to cook at a low boil, stirring as the sauce thickens.  Turn to a simmer and cook for 30 minutes, stirring occasionally, allowing the flavors to marry.

To make the bechamel sauce, melt the butter in a medium size pot, over medium heat.  Whisk the flour into the melted butter until a thick, cohesive paste forms.  Gradually add the warm milk in ¼ – ½ cup increments, whisking until all of the milk is absorbed each time before adding more milk.  Continue this process until all of the milk is added and a smooth thick sauce has formed.  Reduce the heat to low and add the nutmeg, black pepper, and parmesan cheese to the pan.  Whisk until smooth.

Bake for 40-50 minutes until browned and bubbly.  Important – let rest for 45 minutes to 1 hour before serving so your bechamel can set and will be light and fluffy – you will thank me!!

Serve with a Greek salad (see recipe on the blog) and a nice bottle of red.