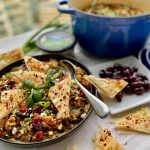 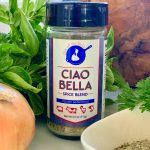 1 jalapeño pepper, chopped (including the seeds)

Heat a large Dutch oven (6-8 quart) over medium high heat.  Chop the bacon into small pieces and cook it until it starts to get crisp and the fat has rendered.  Add the onion, garlic, and jalapeño to the pan and cook until soft and fragrant, stirring frequently, about 3 minutes.  Add the mushrooms and red peppers to the pan and cook for another 4-5 minutes until the mushrooms have released their juices and begin to lightly brown.

Add the cream cheese, both cans of beans, the dill, and the spinach (with juices) to the pot.  When the chicken breast is cool enough to handle, shred into bite size pieces and add back to the pot.  Let cook on low heat while you prepare the phyllo feta nachos.

To make the phyllo nachos, line a rimmed baking sheet with foil.  Spread one sheet of phyllo dough on top of the foil and brush with the melted butter, using a pastry brush.  Cover with another sheet of pastry, brush with butter and repeat this with the rest of the pastry until you have a stack of 12 buttered phyllo sheets.  Sprinkle 3 ounces of the Treasure Cave Crumbled Feta (half of one container) over the top of the last pastry sheet.  Bake for 10-12 minutes until the pastry is golden brown and lightly puffed.

Remove the pastry from the oven and slide onto a cutting board.  Cut into 3-4” squares and then cut each square in half diagonally to create your ‘nacho’ triangles.

While the nachos are baking.  Stir 3, 6-ounce containers of the Treasure Cave Crumbled Feta Cheese into the chili with half of the scallions and half of the cilantro.

Serve the chili hot in bowls garnished with the remaining scallions and cilantro, the chopped olives, and more of the Treasure Cave Crumbled Feta!  Top with several of the phyllo nachos (you’ve probably already noshed on several since they are pretty irresistible)! DEVOUR!