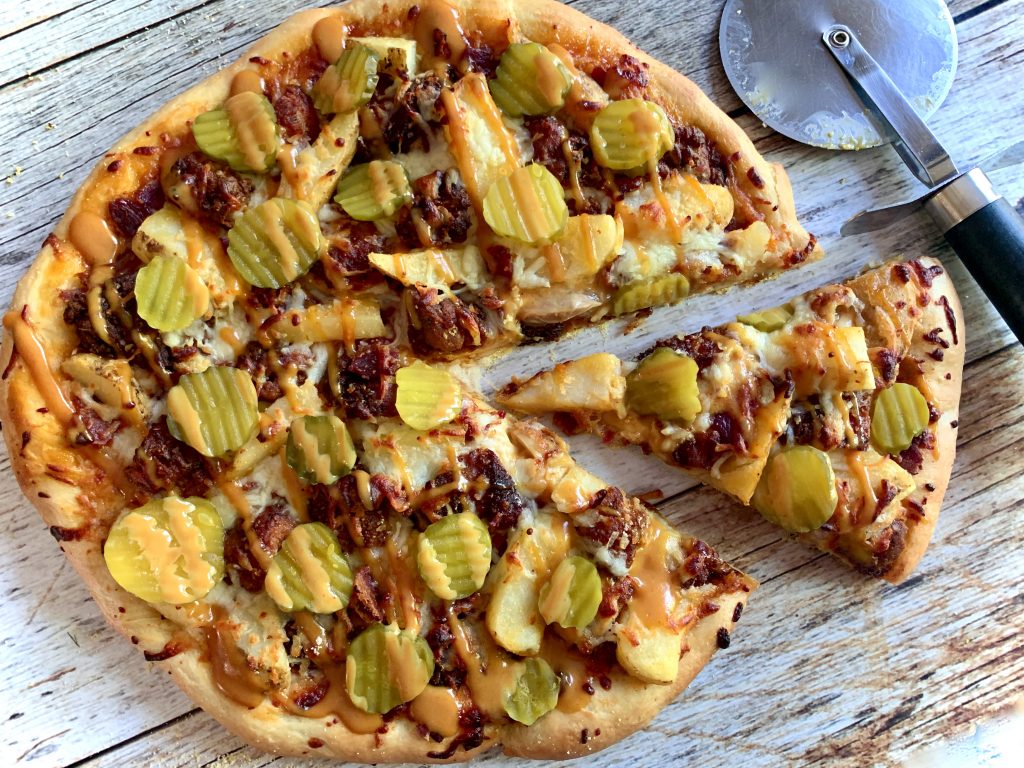 Dough for 1 pizza crust (recipe below)

Make the sauce by combining all of the ingredients in a small bowl and whisking until smooth.  Cover and set aside until ready to use.

Shape the pizza dough into a 12-14” round.  Spread cornmeal on a pizza peel and arrange the dough on top.

Spread ½ cup of the sauce evenly over the dough, leaving ½” of crust uncovered around the edge.  Top with 1 ½ cups of the cheese.  Evenly arrange the chopped chicken, bacon, and French fries over the top, followed by the remaining 1 ½ cups of cheese.

Brush the exposed edge of crust with the olive oil.

Slide the pizza onto the preheated stone and bake for 15-20 minutes until lightly browned and bubbly.

Remove from the pizza from the oven and evenly arrange the pickles on top and drizzle with about ¼ cup of the remaining sauce (I like to put it in a squeeze bottle for easy application).

Cut into slices and devour.

Place olive oil, honey, and water into the bowl of a stand mixer.  Stir to dissolve honey into the water (so it doesn’t stick to the bottom of the bowl).  Sprinkle the yeast on top of the liquid mixture, stir, and let sit for 5-10 minutes until yeast becomes foamy.  Add salt and 2 ½ cups of the flour.  Mix using the dough hook attachment.  Gradually add as much of the remaining flour as needed until a ball forms.  Empty dough onto a floured countertop and knead for 10-15 minutes until dough is smooth and elastic adding flour as needed if sticky.

A WALK ON THE WILD SIDE… CHICKEN, WILD MUSHROOM, AND WILD RICE CASSEROLE