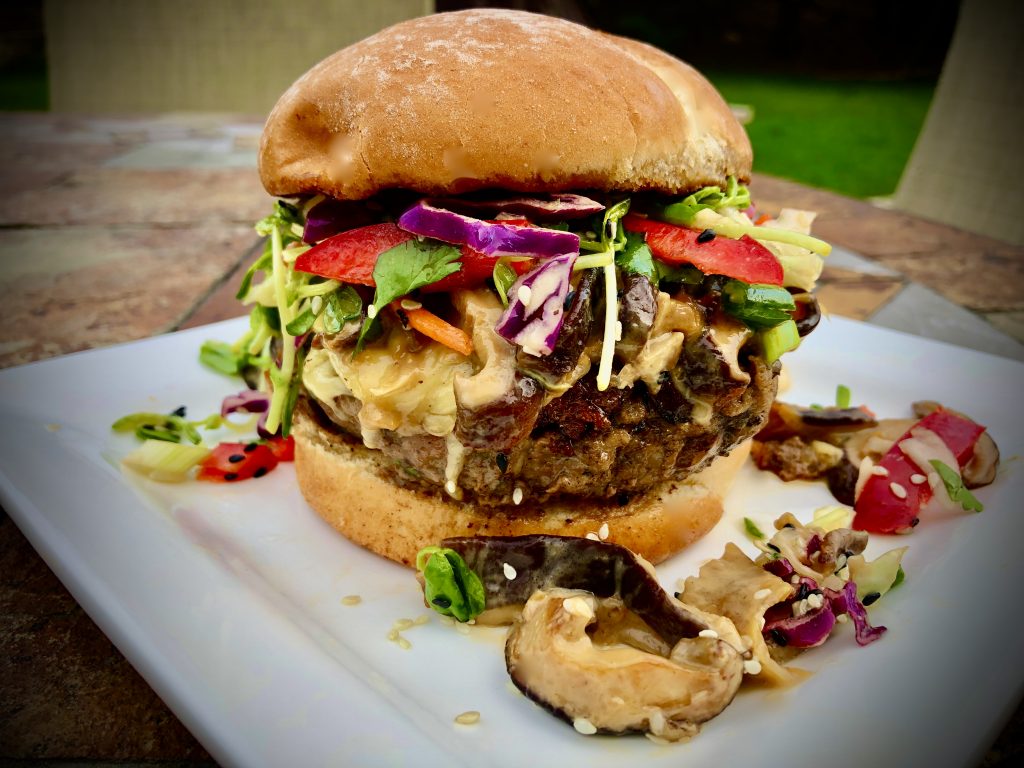 The Cheese and Buns

To make the patties, heat the olive oil in a frying pan and add the crimini mushrooms.  Cook over medium high heat, stirring frequently until mushrooms are browned and fragrant, about 4-5 minutes.  Season with ¼ teaspoon each of the salt and pepper.  Let cool to room temperature.

Place the mushrooms in a large bowl with ground beef, remaining ¼ teaspoon each salt and pepper, soy sauce, fish sauce, and sesame oil.  Using your hands, massage all of the ingredients together until well incorporated.  Form into 6 equal patties.

To make the cream sauce, melt the butter in a large skillet with sides over medium high heat.  Add the onion, ginger, and garlic and sauté until soft and fragrant.  Add the shitake mushrooms and continue to cook for 3 more minutes until the mushrooms have released their moisture.  Add the soy sauce, cream, wasabi, salt, and brown sugar.  Cook for 8-10 minutes, stirring frequently until sauce reduces and is thick and creamy.

Heat a large frying pan over medium high heat.  When hot, add the burgers to the pan (depending on the size of the pan, I do these in two batches of 3).  Cook about 3 minutes per side until beautifully charred.  After 3 minutes on the second side, cover each burger with ¼ cup of the cheese and cover the pan.  When cheese is melted, remove the burgers and melt the butter in the same pan.  Add the buns, cut side down and lightly toast them in the butter and pan drippings.

To assemble burgers, place one patty on the bottom of a toasted bun.  Top with the mushroom cream sauce followed by a heaping amount of the slaw and, finally, the second bun.  DEVOUR!!

My BLENDED BLISS BURGER WITH GINGER SHITAKE CREAM SAUCE AND ASIAN SESAME SLAW is truly blissfully blended both with umami from crimini mushrooms in the patty as well as Asian-inspired flavors blended throughout.  The ginger shitake cream sauce is dreamy with silky shitake mushrooms, bright flavor from ginger, and a little heat from wasabi.  The sesame slaw is bright and crunchy with a delicious Asian vinaigrette.  Every bite packs wow factor flavors and is juicy with layers of mushroom madness!! #BlendedBurgerContest #BlendedBurgerProject