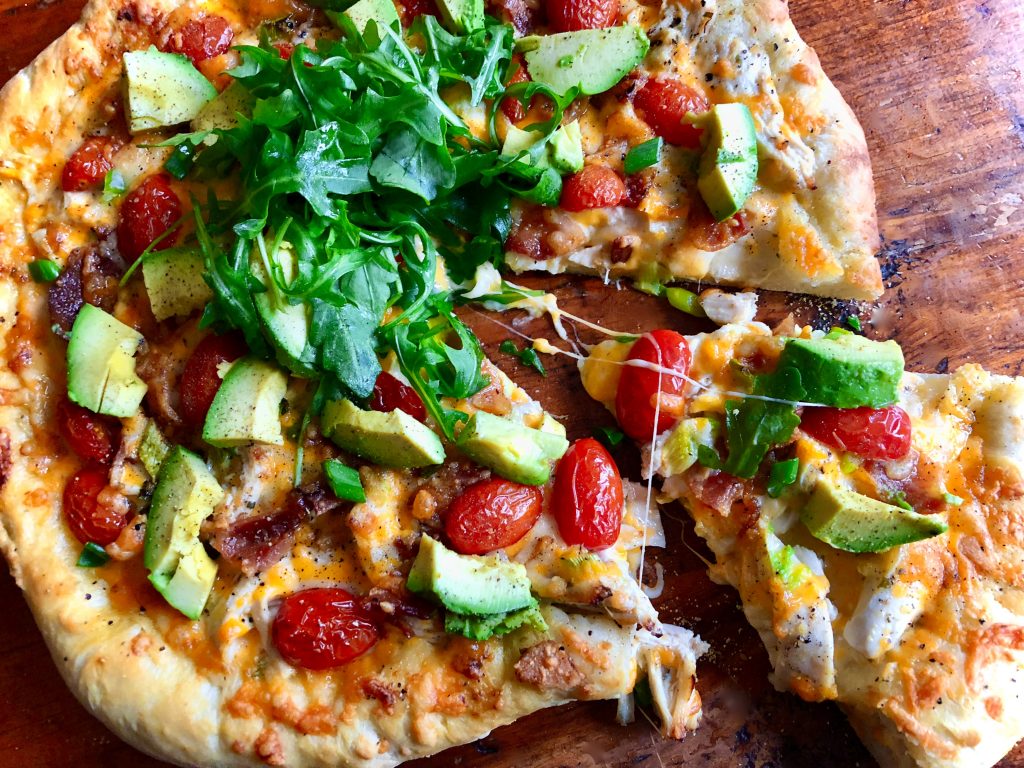 Pizza dough for one crust

6 strips bacon, cooked (not too crisp since they will cook again) and rough chopped

1 cup grape tomatoes, cut in half

Shape the pizza dough into a 12-14” round.  Spread cornmeal on a pizza peel and arrange the dough on top.  Spread half of the ranch dressing evenly over the dough.  Top with 1 cup of the cheese.

Mix remaining ranch dressing with the chicken in a small bowl and evenly layer the chicken on the dough.  Sprinkle another ½ cup of the cheese over the chicken.

Follow by evenly layering the bacon, tomatoes, scallions, and remaining ½ cup of cheese.  Slide the pizza off the peel and onto the stone in the oven.  Bake for 14 minutes until browned and bubbly.  Remove from the oven using the peel.

Top the hot pizza with avocado and season with the black pepper.  Toss the arugula with olive oil and mound the salad in the middle of the pie.  Slice and devour!

Place olive oil, honey, and water into the bowl of a stand mixer.  Stir to dissolve honey into the water (so it doesn’t stick to the bottom of the bowl).  Sprinkle the yeast on top of the liquid mixture, stir, and let sit for 5-10 minutes until yeast becomes foamy.  Add salt and 2 ½ cups of the flour.  Mix using the dough hook attachment.  Gradually add as much of the remaining flour as needed until a ball forms.  Empty dough onto a floured countertop and knead for 10-15 minutes until dough is smooth and elastic adding flour as needed if sticky.