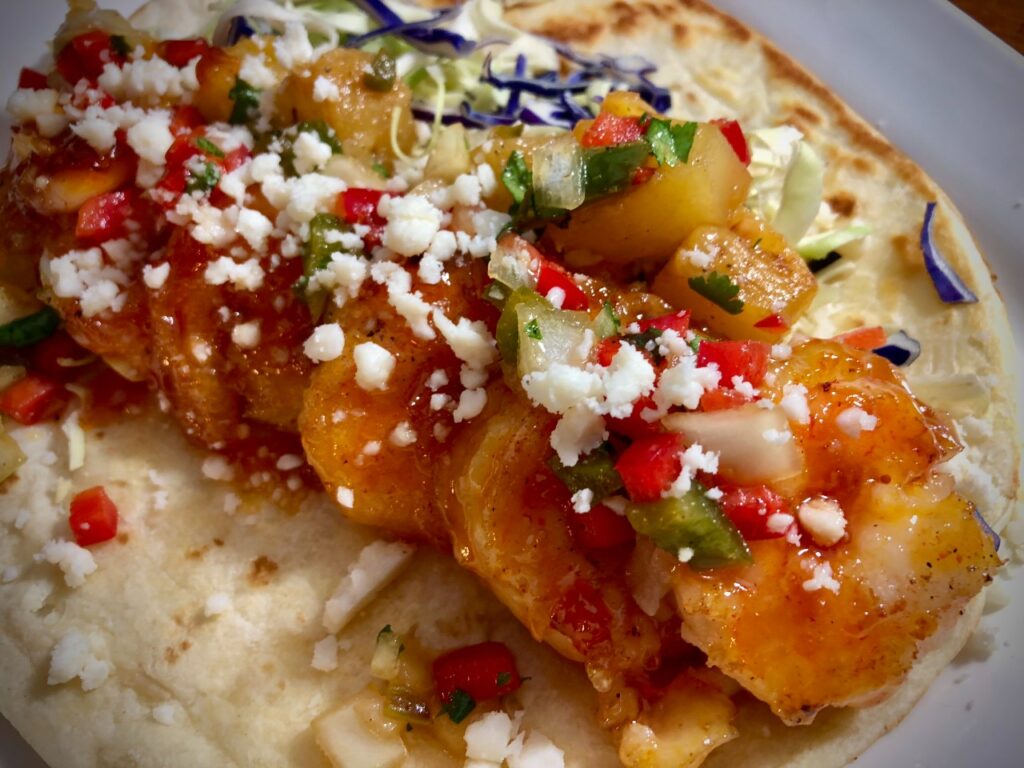 The juice from one lime

The juice from one lime

Vegetable oil for frying (about 1 cup)

To make the salsa, melt the butter in a large skillet over medium high heat.  When pan is very hot, drain the pineapple chunks (reserve juice) and place the chunks in the hot skillet.  Cook for 3 minutes, stirring occasionally until the pineapple is lightly browned and caramelized.  Add the jalapeño and cook for another minute until it is softened and fragrant.  Transfer to a large bowl.

Combine all of the glaze ingredients in a large sauce pan and heat to boiling, whisking frequently until the apricot preserves are melted into the sauce and smooth.  Reduce heat to low and let simmer and reduce while you prepare the shrimp, stirring frequently.

Pat the shrimp dry with paper towels to prepare for frying.  Heat ¼ – ½” of vegetable oil in a large skillet with sides (or use a deep fryer) to 350 degrees.

Whisk together the flour, corn starch, baking powder, and vodka.  Gradually whisk in the water until the batter is similar consistency to thick pancake batter.  Dip the shrimp into the batter and fry on both sides in the hot oil until golden.  Remove to paper towel lined cookie sheet and immediately season with salt.

To prepare tacos, heat a large skillet over medium heat.  Brush each tortilla with a little olive oil before adding to skillet.  Toast until golden and crispy, about 1 minute per side.

Take one toasty tortilla and place about ¼ cup of slaw down the center.  Dip the fried shrimp in the glaze and layer 4-5 shrimp (depending on size) on the slaw.  If the glaze gets too thick, just whisk in a little water.  Top the shrimp with the pineapple slaw and sprinkle with cojita cheese.  DEVOUR!!!  SO YUMMY!!!