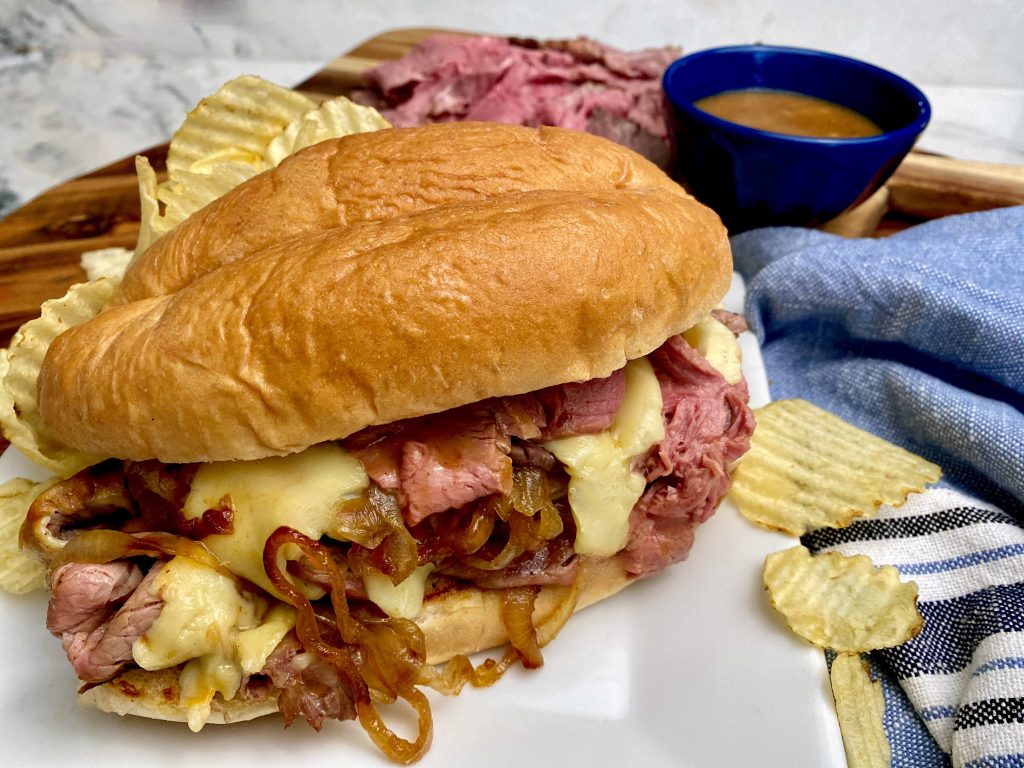 To make the caramelized onions, melt the butter in a large skillet over medium heat and add the onions, sugar, and salt to the skillet.  Cook, stirring frequently, until they are silky and caramel brown in color, about 30-40 minutes.  You do not want them to ‘brown’, so turn the heat down if you start to see this start to happen.  This is a ‘low and slow’ cooking process.

To make your sandwiches, heat a flat top or large frying pan over medium high heat.  Cut the rolls in half lengthwise and spread the butter on the cut sides.  Add the rolls to the hot pan and sear for 1 minute until golden brown.  Line the bottom halves of the toasted rolls on a foil lined baking sheet and set the tops aside.

If the au jus is not hot, place it in a large sauce pan and warm it.  Using tongs, dip about ½ – ¾ cups of the sliced beef in the warm jus.  Spread the meat on the bottom of one roll and repeat with the other five rolls. Top each the caramelized onions with 2 slices of the provolone.

Broil until the cheese is melted, 1-2 minutes.  Remove from the oven and place the top half of the roll on each.  Serve with more au jus on the side for dipping.

Rub the beef all over with the salt, pepper, and garlic.  Place in a large roasting pan.  Bake for 2-2 ½ hours until the internal temperature reaches 115 degrees (it will continue to cook while it rests).  Remove from the oven, tent with foil, and let rest for 30 minutes.

To make the au jus, drain ¼ cup of the fat from the pan after cooking the beef (or use fat trimmed from the roast before cooking). Heat the fat in a large saucepan. Whisk in the flour, salt, and pepper. Add the beef stock and bring to a boil. Let cook for 3-4 minutes, whisking frequently, as it thickens slightly. Keep warm until ready to serve.

CLEAN OUT THE FRIDGE KIELBASA AND CABBAGE CASSEROLE