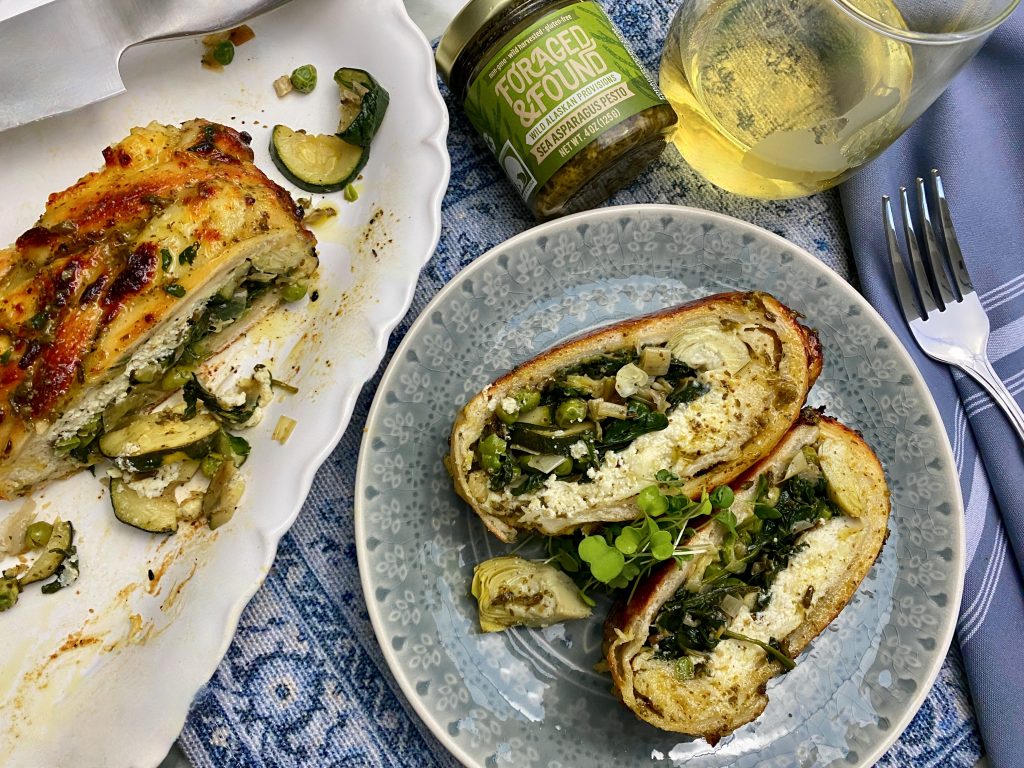 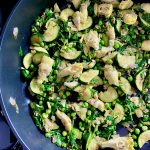 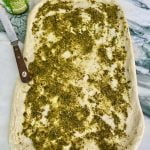 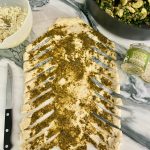 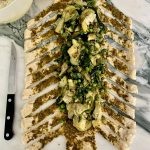 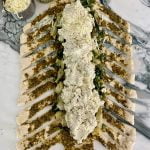 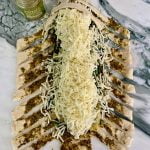 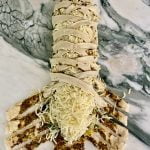 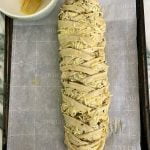 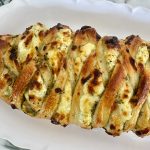 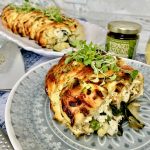 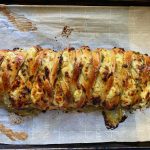 Heat 2 tablespoons of the olive oil in a large deep skillet over medium high heat and add the leeks and garlic.  Cook for 2 minutes until fragrant and then add the zucchini, salt, and pepper to the pan.  Cook, stirring frequently for 4-5 minutes until the zucchini is tender and lightly browned.  Add 2 tablespoons of the pesto along with the spinach, peas, and artichoke hearts to the pan.  Cook, stirring and folding the mixture together until all of the spinach is wilted and there is no excess moisture in the pan.  Set aside to cool while you prepare the rest of the ingredients.

Combine the ricotta, parmesan, and 2 tablespoons of the pesto in a small bowl and set aside.

Place your dough on the countertop and drizzle with about 1 teaspoon of olive oil.  Knead for about 2 minutes and let it rest under a clean kitchen towel for about 20 minutes.  Using a rolling pin, roll the dough into a rectangle approximately 12” x 14” (with the short side closets to you).  If the dough is very springy, let it rest for 10 more minutes and go back to rolling it out. Lightly oil your fingers and push the dough into shape as needed.  You may need to let the dough rest several times until it takes the full shape.

Spread 3 tablespoons of the pesto evenly over the dough with an offset spatula.

Using a sharp paring knife, cut diagonal slits 3” long and ¾” wide down each “long” side of the dough, leaving 3” of the dough in the center of the rectangle, uncut.  As a result, the top 2 corners will be cut completely off and you will cut 2 notches at the bottom of the dough to create the last 2 strips (see image below).

Place the veggie mixture down the center of the dough leaving about 1” of dough exposed on both the top and bottom.  Top the veggies with the ricotta mixture.  Top the ricotta with the shredded mozzarella cheese.

Place the egg yolk in a small bowl with one teaspoon of the water and mix with a pastry brush.  Dab some of the egg wash on the exposed pieces at the top and bottom of the braid and fold them into the braid, sealing the filling inside, and pressing to adhere.

Gingerly transfer the stuffed braid to the parchment-lined baking sheet.

Brush the rest of the egg wash all over the braid.  Cover loosely with a clean kitchen towel and let rise for 1 hour.

Preheat oven to 425 degrees for at least 20 minutes.  Bake the braid for 12 minutes until it is golden brown and bubbly.

Cut into slices, garnish with microgreens, and DEVOUR!!!

Place olive oil, honey, and water into the bowl of a stand mixer.  Stir to dissolve honey into the water (so it doesn’t stick to the bottom of the bowl).  Sprinkle the yeast on top of the liquid mixture, stir, and let sit for 5-10 minutes until yeast becomes foamy.  Add salt and 2 ½ cups of the flour.  Mix using the dough hook attachment.  Gradually add as much of the remaining flour as needed until a ball forms.  Empty dough onto a floured countertop and knead for 8 minutes until dough is smooth and elastic adding flour as needed if sticky.