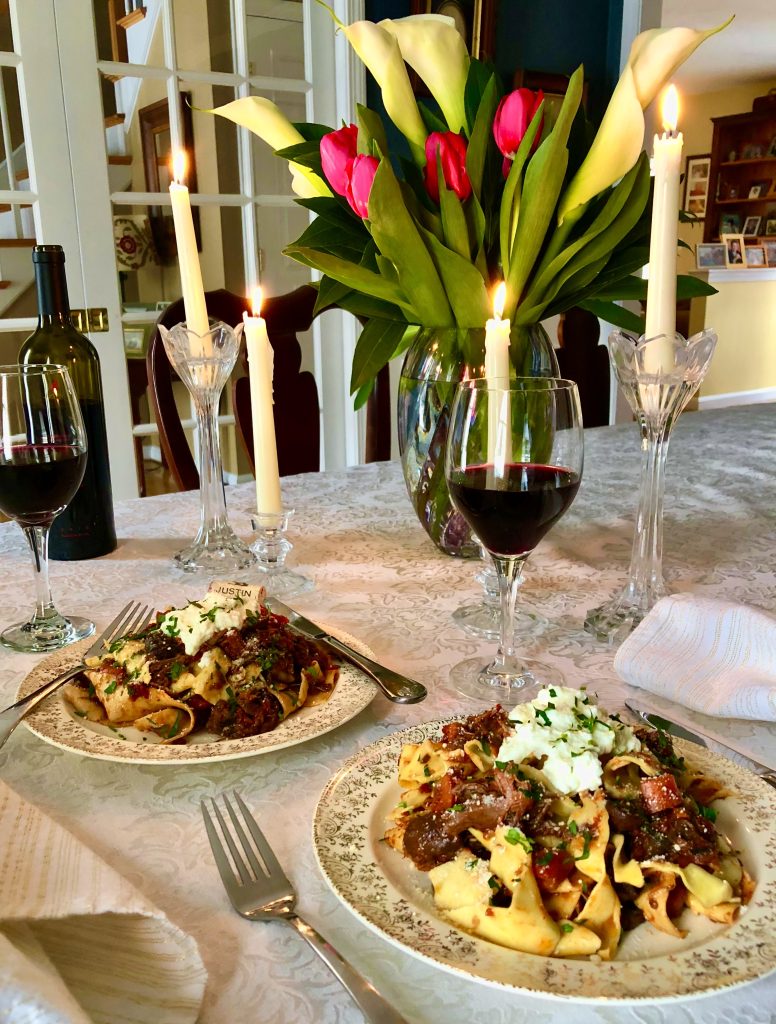 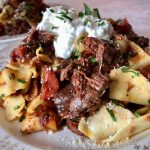 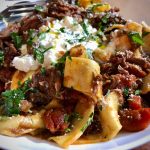 12 sprigs of thyme, tied together with kitchen string

Heat the olive oil in a large Dutch oven over medium high heat.  Season the lamb shanks all over with 2 teaspoon of the salt and the black pepper and massage into the meat.  Add the shanks to the hot pot and get a good sear on all sides, about 2 minutes per side.

Add the tomatoes and gently crush the full tomatoes with a fork or potato masher.  Add the wine, thyme, brown sugar, and remaining teaspoon of salt to the pot.  Bring to a boil, stirring occasionally.  Cover and place in the preheated oven.  Cook for 3-3 ½ hours until the meat is falling off the bones.  Take the pot out of the oven at 2 hours and flip shanks and stir the juices.

When the ragu is finished, skim any excess fat off the top of the sauce using a large metal spoon and discard.  Remove the meat from the bones (it should just fall off) and shred into bite size pieces and mix into the sauce.  Resist the urge to eat all of the meat as you do this…. It won’t be easy… soooo good!!

While the ragu is in the oven, make the ricotta.  Pour the milk and cream into a large pot. Bring to a full boil over medium heat, stirring occasionally to avoid sticking on the bottom of the pot. Stir in the salt.  Turn off the heat and stir in the vinegar. Allow the mixture to stand for 20-30 minutes until it curdles. It will separate into thick parts (the curds) and milky parts (the whey).

Pour the mixture into a cheesecloth-lined sieve or strainer, over a large bowl, and allow it to drain into the bowl at room temperature for at least 1 hour, occasionally discarding the liquid that collects in the bowl. The longer you let the mixture drain, the thicker the ricotta. (I tend to like mine on the thicker side and let it sit for up to 2-3 hours). Transfer the ricotta to a bowl, discarding the cheesecloth and any remaining whey.

To make pasta dough, place the flour on a clean counter and create a large well with flour ‘sides’.  Beat the eggs, yolks, salt, and olive oil in a large bowl and carefully pour into the flour ‘well’.  Using a fork, slowly incorporate the flour into the eggs, pulling it from the sides of the well until a mass forms that you can further pull together and form with your hands.  Continue to incorporate the dough, dusting with flour as needed.  Knead for 8-10 minutes at least until smooth and elastic.  Cover with plastic wrap and let rest on the counter for 1 hour at room temperature or up to 4 hours in the fridge.

Divide the dough into 6 equal pieces and form each piece into a flat disc.  You can either roll each piece by hand until very thin (you can read a newspaper through the dough) or use the pasta attachment for your KitchenAid mixer (my preference), starting at “1” on the attachment and continuing to pass the dough through at each level up to 5 until you have a thin sheet of beautiful dough.

To make pappardelle, cut sheets to 10-14” in length.  Then fold each end into itself, like you would fold a letter (if you are a millennial… google ‘how to fold a letter’ Ha!)… and cut into ½”- ¾” strips.  Separate and unfold the noodles and dust generously with flour to avoid sticking.  When you are ready to serve, bring a large pot of water to a boil.  Add ¼ cup salt.  Boil the noodles until al dente firmness, about 3-4 minutes.

LINGUINI WITH KIELBASA, TOMATOES, AND SPINACH IN PINK VODKA SAUCE