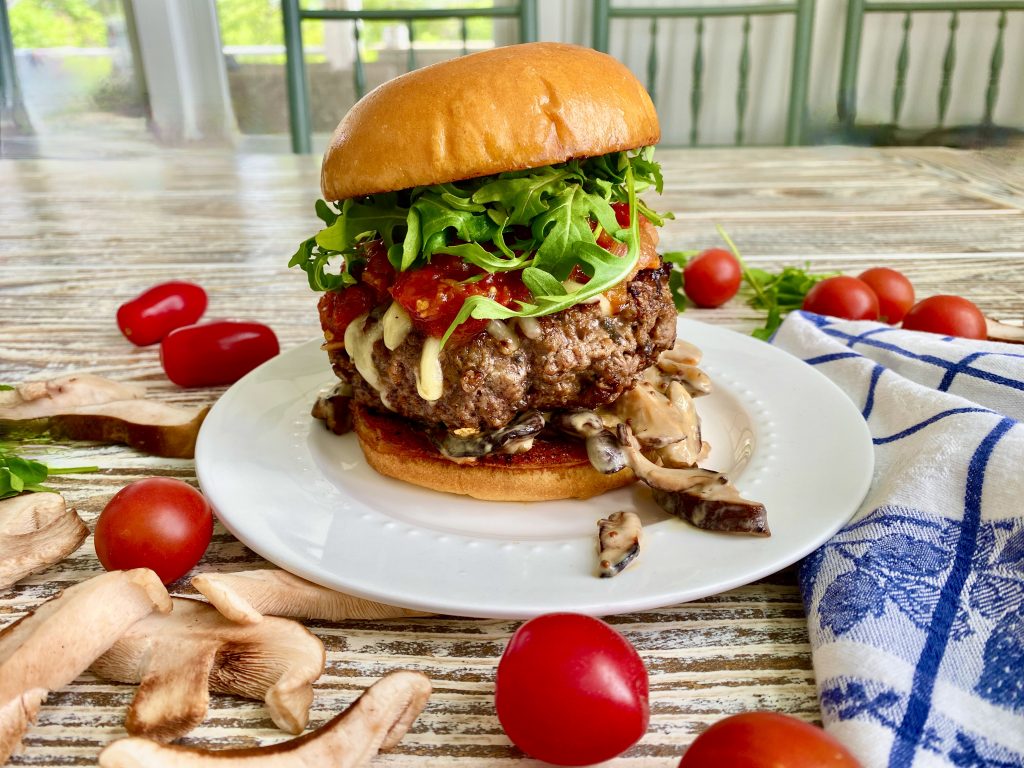 To make the burgers, heat the olive oil in a skillet and cook the onions and garlic until soft and fragrant.  Add the cremini mushrooms to the pan and cook, stirring frequently, until all of the moisture is absorbed, and the mushrooms are browned, about 10 minutes.  Set aside to cool to room temperature.

When the mushrooms are cool, place them in a food processor and pulse until they are broken into small pieces but not pureed.  Add the chopped mushrooms to a bowl with the ground beef, egg, salt, pepper, garlic powder, and 1 cup of the shredded cheese.  Massage everything together with your hands until well combined.  Form into 6 patties.

While the mushrooms for the burgers cool, make the jam and the mayo.  To make the jam, heat the olive oil in a large saucepan and add the onion, garlic, and tomatoes.  Let cook on medium high heat until the tomatoes begin to blister.  Continue cooking and smash the tomatoes into a paste and add the sugar, red pepper flakes, balsamic, apricot, and salt.  Cook, stirring and smashing until a jam-like consistency forms.  Remove from heat and set aside.

For the mayo, heat olive oil in a frying pan and add the onions, garlic, and shitakes.  Cook stirring until the mushrooms are soft and begin to turn brown.  Let cool to room temperature.  Combine the mushrooms, mayo, mustard, and salt in a small bowl and stir to combine.

Cook your burgers in a large non-stick skillet over medium high heat for about 3-4 minutes on the first side until a brown crust forms.  Flip and cook for 5-6 minutes on the other side until internal temperature reads about 130-135 degrees.  Top each burger with a mound of the remaining shredded cheese and cover the pan for 2 minutes until the cheese is melted.  Remove to a plate and toast the buns in the pan drippings.

To serve, coat one of the bottom buns with some of the shitake mayonnaise, top with a burger, followed by the jam, a pile of arugula, and the top of the bun.